So the biggest news today is the Meat Boy (map pack) is now live on newgrounds.
http://www.newgrounds.com/portal/view/472826

You can download the standalone version for mac and pc here:
http://www.newgrounds.com/downloads/flash/meatboymappack.zip

The game consists of 70 new (super hard) levels made by the fans, 4 new playable characters and 4 new alt. ending cut scenes. We also unlocked all the extras from meat boy 1 for those of you who never got to see the first games ending.

The game will beat your face in, its fucking hard, it honestly took me 3 days to beat all the levels and get every bandaid. so for all you masochists out there, this ones for you.

To go along with this release, Tom has release a special Dr. Fetus tshirt! 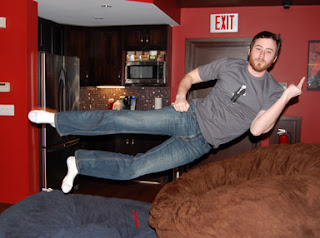 its fucking awesome and something everyone should own, also a good way to tell everyone to fuck off. Im trying to prove that video games + toys and tshirts are a good thing, so buy it! :)

In other merchandize news, ive recently had my work placed on a few skate decks. as of now you can only get them if your local to santa cruz, but i hope to have a few online in the coming months. heres a pic of them, can you tell what ones are mine? 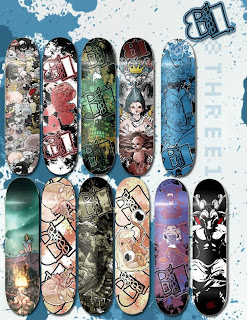 And last bot not least, i felt the need to post this image from the still unofficially titles "gun". it was just too awesome not to post it :), this games going to rock hard. 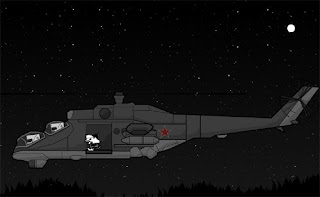 Any one have any good names for "gun"? seriously we are in dire need of a good name for it, i cant keep calling it "gun". feel free to post your suggestions.

also anyone who missed it on the Cryptic Sea blog, heres the video preview for the No Quarter beta (submitted to the igf).

Here's my idea for the title of Gun:

Take it or leave it.

To me it looks like the enemies are committing suicide in an attempt to hurt you. As that is known as "hari kari"

I would suggest you just shorten that and call the game simply:

just throwing this out there, but...

If you absolutely insist on not giving the game an awesome title like "Gun", then maybe you could add a couple words that are descriptive to the gameplay, "Run and Gun". Or "Run'n Gun" for short. It's kind of like "Rush'n Attack", only with fewer Russians and more Gun.

It doesn't take the "killing thousands of Hitler clones" into account, but then I thought that could pretty much be assumed. If you really think it needs to be stated, it could be "Run'n Gun Commando".

But as we all know that "Bionic Commando" was censored in the English translation, what with all the "Master-D", I guess you could call it "Run'n Gun Commando (Uncensored Edition)".

On the other hand, "Master-D" sounds like a rapper. In this day and age I'm sure that it would be more socially acceptable to kill Hitler clones than rapper clones. Perhaps then this really could be a censored game about running off and killing thousands of rapper clones over a personal vendetta against his "music".

i have a few ideas to further expand meat boy without destroying its well put together structure; if youre willing to hear me out. i have a small list of new obstacles/weapons and a few other small things that could easily be put into the game without too much effort.

i definately wouldnt mind furthering this series to another map pack or two, or possibly a sequel. if youre interested, please give me a shout on kong (same name).

How about "Peacemaker" as an alternate title for Gun? :D

roboticaust: Tommy, jon and i are actually working on a "full" version of meat boy that expands on the origional. we tried out quite a few new tile types but werent able to add them all because of flash limitations and because it was jons first game. there will be loads of new stuff in the full game.

As far as a title for Gun goes, alex and i have been talking about using the title Alpha Red. what do you guys think of that?

Alpha Red sounds like an old '8os action movie.
Which has just upped my anticipation for the game.
Awesome.

Hitler? I barely even know her!

and other less hitler aimed titles

a little late with the post but, hey worth a shot